Do you ever hear words your buddies who play golf talk about all the time like birdies, bogeys and par and have no clue what they ever mean? Or are you new to golf and heard people screaming FORE! really loudly and have no clue how to react? Just so you know, if you hear someone yell FORE! you better find cover because a golf ball might be coming your way at full speed. Golf terms may sound weird but they are valuable to golfers.

Whether you are new to golf or have played for awhile, there might be terms that you still do not understand. Here is a list of basic golf terms which are essential for you to understand the golf slang better.

Typically the clubhouse bar where golfers head to after their 18 hole match.

When a player hits the ball from the tee into the hole with one stroke. Commonly on Par 3s. Also known as a hole in one.

When the ball is hit into the hole 3 strokes under par typically on Par 5s.

A shot to the pin or the green after the tee off.

When the ball is holed 1 stroke UNDER par.

When the ball is holed 1 stroke OVER par.

When putting a ball, the curve of the ball due to the slopes or the grain of the green.

A sand filled area below ground on the fairway or around the greens. Designed to be hazards. Also known as Sand Traps.

The distance of the ball from impact until it touches the ground.

A left or right bend in the fairway from the tee box until the green. The direction is also mentioned ie, dogleg right or dogleg left.

A horrendous shot. Usually a shot when there is little to no contact between the golf ball and the club face.

When the ball is hit into the hole 2 strokes under par. Typically in Par 4s and Par 5s

A controlled shape of a shot from left to right with a curve. (Right to left for left handed golfers)

The area of green surrounding the greens. The grass that is in between the green and the fairway.

Important term to remember to save lives! It is a warning shout for when the ball is flying towards the direction of people in risk of hitting them. Remember to shout it out loud!

This refers to when the other players in your flight agree that the distance of your ball to the hole is very short hence awarding you with a putt without actually playing it. Gimmes are only allowed in match play or friendly matches. In stroke play everything must be holed out.

A wide area around the hole with very short grass for putting.

A system used to rate a player based on their average number of strokes above par.

Anything on a golf course that is designed to cause trouble to your scores. Like bunkers and water.

A ball on the green is considered in regulation if the ball is touching the surface of the green when the number of strokes taken is at least 2 lower than par. (On par 3s first stroke, on par 4s second stroke and on par 5s 3rd stroke)

The edge of the hole or bunker

A competition scored on a hole-by-hole basis. The total number of strokes does not determine the winner. Number of holes won determines the winner therefore there is a possibility of not playing all 18 holes.

A chance for redemption if you felt like you hit a bad shot. It allows you to take another shot from the tee with no penalty to your strokes. Very common in casual play with one mulligan. Rules between friends may differ but it is not allowed in tournaments.

OB is short for Out of Bounds. Usually marked by white stakes, it is the area outside the course play area.

This is the number of strokes a golfer is expected to hit to complete one hole on a golf course judged based on the length or the hole. Also for the course which is the sum of all the holes’ pars. Commonly on golf courses holes are either a Par 3, Par 4 or Par 5 (In some cases there are Par 6 long holes).

A pin is the flagstick and pin high means that a ball is level with the pin but to the side.

A player with a handicap less than zero. This is when golfers add their handicap to their score.

This is a permission to lift and drop the ball without having a penalty stroke. Typically when the ball is unplayable such as in a drain in the middle of the fairway or on the cart path.

A player whose handicap is zero.

A shot hit by the hosel (butt) of the club which causes the ball to shoot out sharply to the right.

A shot that curves violently from left to the right (Right to left for left handed golfers). Most common shots among beginners and high handicappers due to striking the ball with an open clubface or an in-to-out swing.

The most common scoring in professional tournaments. It is scored based on the total amount of strokes taken in the tournament and the fewest strokes wins.

A small peg placed into the ground to hold the ball up. Typically used in the first shot of a hole.

The beginning of a round or a hole of golf by playing the ball from a tee.

Usually a mishit on the ball where the club face strikes too high on the ball. Sometimes also known as blading the ball. Extreme cases would be a top when the club head impacts with the top of the golf ball.

Hopefully after reading this list you’ll have basic understanding of what these golf terms mean! Just remember that you should always shout FORE! when you hit a ball that is heading towards players and yell it loud! Also if you do hear fore while you are playing golf, drop whatever you are doing and run for you life!

Here is also a guide for simple exercises to maximize your golf performance from the comfort of your own home. Work that body out and you will be able to swing like Bryson DeChambeau in no time!

There is plenty of golfers around looking for other players to play with. If you are interested or if your friends are busy and cannot get a round of golf in with you, download and register in the Deemples app to join and host games! 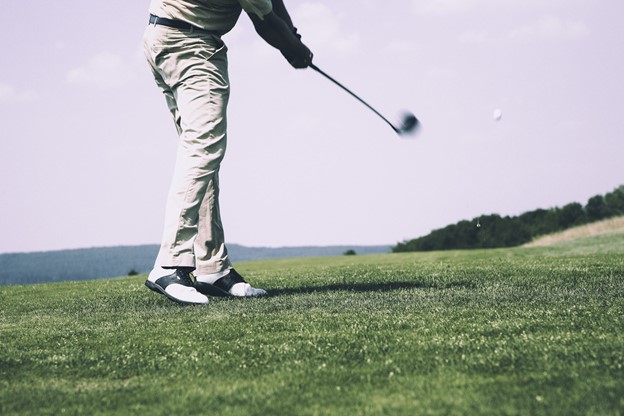